While the old religions of the Middle Ages try with less and less success to make believe that homosexuality is an act against nature, scientists do their research methodically and regularly discover that all forms of sexuality are found in nature.

All homosexuals agree that they did not choose their sexual orientation and the same applies to the proponents of the choice of orientation who are unable to tell when they chose to be heterosexual.

Scientists claim that sexual orientation is innate and that the whole phenomenon is about our genetics. Once twisted by religions, science has thus set the record straight and confirms the claims of Maitreya RAEL.

Meanwhile, more and more countries have decided to free themselves from outdated religions by opting for a civil society that applies the Universal Declaration of Human Rights.

At the same time, thanks to scientific research (pour éviter la redondance je changerais pour: science), researchers are working relentlessly to restore the facts about sexual orientation, always pushing the limits of science that are infinite.

In the West, several studies have been completed and one of the best known is the Kinsey Reports, produced in the United States in 1948. The biologist Alfred Kinsey has become famous thanks to his famous scale of 7 categories of human sexual continuum. 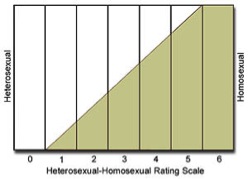 In 1948, KINSEY suggested that a large percentage of humans (86%) shared a sexual attraction between the two sexes (bisexual), but at different intensities; while a small percentage (14%) say they have an exclusive attraction for people of the opposite sex (heterosexual) or same sex (homosexual).

In 1999, in United States, the biologist and sexologist Bruce Bagemihl has illustrated the manifestations of homosexuality found everywhere in nature. He therefore makes the religions lie as they keep trying to pretend otherwise. He published: Biological Exuberance: Animal Homosexuality and Natural Diversity.

In 2006, in Oslo, the Zoologist Geir Soli also confirmed Bagemihl’s findings with his exhibition at the Museum of Natural History, where he lists more than 1,500 animals expressing homosexual or bisexual behavior.

More recently, in February 2010, Doctor Jacques Balthazart - Doctor in sciences (Biology) and Behavioral Neuroendocrinology - publishes the results of his research team: "Biologie de l’homosexualité. On naît homosexuel, on ne choisit pas de l’être" (Biology of homosexuality. We are born gay, we do not choose to be).

On December 13, 2012, William Rice (University of California), Urban Friberg (Uppsala University, Sweden) and Sergey Gavrilets (University of Tennessee) hypothesize that homosexuality can be explained by a phenomenon well-known today, epigenetics (how our genes are expressed). For these researchers, it has to do with these markers at a specific time of foetal development.

Finally in January 2014, Professor. Dick Swaab, in Holland, published the results of his research in a book titled: "We are our brains" where Professor Dick Swaab developed about sex and the brain. The Dutch neuroscientist is as celebrated as he is sneered at for his theories on brain development differing between men and women – and how sexuality is decided in the womb.